Can't we all just get along? 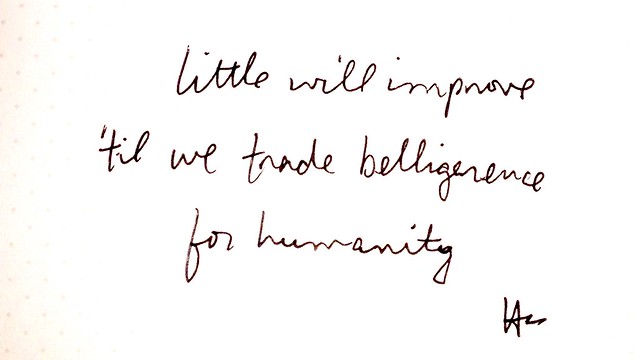 When I started scribbling down a few other attempts at this haiku, I was thinking about something that happened in Philadelphia a week ago, when a gay couple was attacked by what could best be described as a small mob.

Not a proud moment for a city I love.

It doesn’t matter to me personally whether you approve or disapprove of anyone’s lifestyle or belief system. I don’t doubt these were factors driving at least some of the attackers, but that’s not what scares me most about a story like this.

The basic failure running through so much of our society — from brutal attacks like this to childish political discourse — is that so many people seem to think a difference of belief or lifestyle justifies a complete lack of civility. So many of us have decided (consciously or not) that we simply don’t want to bother dealing constructively with anyone or anything that challenges our view of the world.

It’s pathetic, and I honestly don’t know why so many people in a “civilized” society are content to operate on such an infantile level. The idea that so many of us see compassion and civility as afterthoughts, rather than integral parts of daily life, is what truly frightens me.