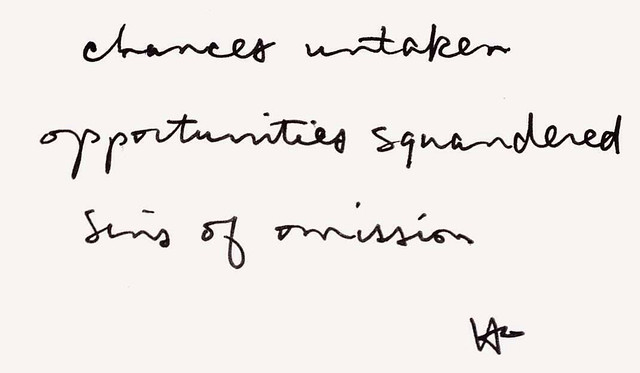 Like most thoughts in my head, this one seemed to pop in coincidentally. I was listening to Seth Godin‘s The Icarus Deception while driving home this morning. The section I was listening to was about failure — not the things you put your heart into that don’t work out, but rather those things you don’t even attempt. Think of a idea you get that you think might turn out really well, except you never actually put it into action.

I can relate to this kind of failure. To be fair, I get so many ideas bouncing through my head that there’s no way I couldn’t pass on most of them. But there are those few I know could be great, but I never follow through.

Those are the failures I’m most likely to regret. They’re also the failures I’m working harder to avoid these days. Whether it’s putting in a resume for a job I really want even though the competition was fierce and plentiful or merely putting my thoughts out for the world to see when part of me is scared to death I’ll be shamed and ridiculed.

This one’s for the people who put it all out there for whatever they really want, even though the heartbreak of failure might shake them to the core. And it’s for the ones who know the agony of never knowing what might have been.