I got an email a few weeks ago from Suanne Laqueur. Suanne had stumbled across the Flickr image of the poem below, and it seemed to tap into the same inspiration she’d followed while writing her novel. She said she froze when she saw the poem on the screen. 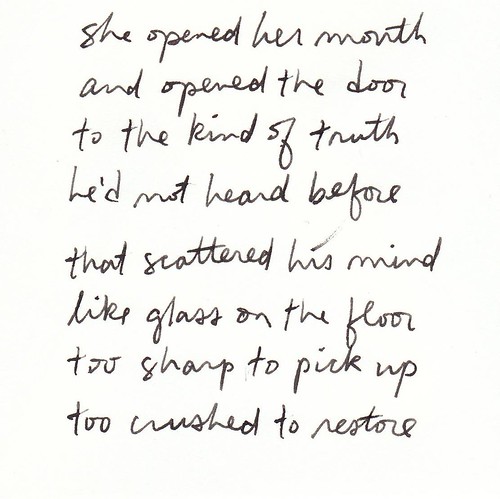 What better effect could a writer hope for? To have people come to a complete stop because my writing spoke so directly to them is about as awesome a response as I can imagine.

In the ensuing discussion, I thanked her for letting me know my little poem had made an impression on her. It’s a profound experience to know something you’ve created has struck a chord with someone else. Occasional royalty payments are fine. A life-sustaining stream of royalties might be even better. But given a strict choice between unimaginably large sums of money and feedback from those who’ve found a connection with my writing, I’d take the human connection any day.

When your work resonates with others, it’s proof none of us are alone — that someone else understands on some level. When what you do is an expression of who you are, what you believe or what you feel, resonance is the most gratifying result you can hope to find.